I’m a high school kid in the Hunter Valley itching for a move to the bright lights of the big city, circa 1996. Looking for a break in journalism that doesn’t come… deferring university permanently doesn’t cut it with the big newspaper companies. Can’t even get a look in as a coffee-fetching, weather report writing cadet. Figure the only way to make it is a two-hour, one-way drive down the Pacific Highway to Sydney. Need to be in the thick of things for a better shot at breaking through. Work some odd jobs in high-rise office towers while offering my modest writing skills for free on the side. I hustle my unpublished, unproven wares to unimpressed editors for more than a year without a sniff of success.

Eventually it happens. A start as a music street press reporter with rags like 3D World and Revolver, long dead relics of the newsprint industry. Back when they were very much alive they were vital street bibles for our daily lives, the weekly source of who’s who in the zoo of all the scenes in Sydney (dance music, rock ‘n roll, hip hop, art, film, food, theatre, etc etc). Not yet out of my teens and my first articles are published. There’s the rush of racing to grab a copy as soon as the stacks are delivered and piled into haphazard towers of print near the front door of every record store. The stuff teen dreams of a writing career are made of. The slow page-turning anticipation of seeing your byline in print, right there in black and white, the whole city reading your stuff. Then the careful checking of your words to see how much they’d amended, cut or just messed up. Tough business to be in for a young writer, tough and thrilling like some kind of hit-or-miss adrenaline shot to the heart of your ego. 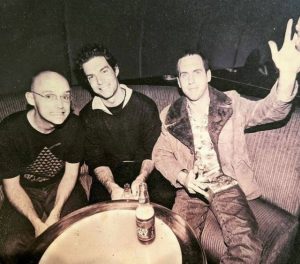 Things were tangible and hands on, more physical before digital took over. More easily memorable. Flicking through racks of CDs and stacked milkcrates of vinyl. Keeping the price tags on your CD or vinyl so you can recall where you bought it… $10 special at Red Eye or a $50 limited edition from Waterfront?  Asking for advice from the music nerds behind the counter on the best new releases and undiscovered gems they were privy to. The ink smudges on your fingers from leafing through those big beautiful pages of newsprint. The total, blissful absence of the internet and social media, and no cameras on our phones and no easy searchable answers for every question. The best of times, said without good-old-days style sentimentality because remember the live music scene was loud and kicking, the clubs were full and hedonistic and always open and Sydney was one of the greatest cities in the world, at that time, with its little pockets of soul and electrifying energy and some grit and gutter trash and much, much cheaper real estate so artists, musicians, creatives and even street press journos like me could afford to live within a 10km radius of the CBD. I loved every minute of it, or at least the bits I can still remember.

A year or so more of that freelance hustle. Then I hit what I thought was the big time. It was the big time for a kid from the bush who loved writing and music and all the scenes. Appointed editor of Revolver just before my 21st birthday. By now I’d done my time at the coalface. I’d reviewed the latest CDs before they were released to the listening public, interviewed rock stars, rappers and DJs, often late at night and nearly always in dingy bars, and I’d covered live gigs into all the hours of all the weekends. For free. Now, I was getting paid to dish out the CDs, allocate the free concert tickets and line up the interview slots for hungry writers. All of them were older and cooler and better writers than I ever was. Nevermind. What a ride. 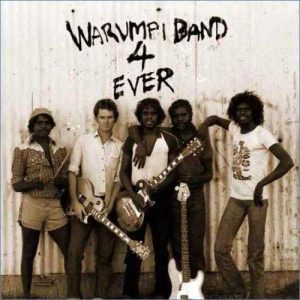 By this point in time, I need to detox. Urgently. A move to Central Australia because why not? The most incongruous career move possible to do something more meaningful. Got a gig with World Vision in the desert working as a project officer to assist in tackling the scourge of petrol sniffing. Helped build a recording studio in the home community of the legendary Warumpi Band. Peter Garrett cut the ribbon at the opening. Over the ensuing months, legends like Paul Kelly, Troy Cassar-Daley and Bunna Lawrie recorded songs there with locals as their impromptu backing band. I think Paul recorded a rendition of Pub With No Beer with Sammy Butcher on guitar, a cheeky nod to the dry status of the community.

It was time to get back into journalism. The only mainstream newspaper I could convince to give me a break was The Centralian Advocate in Alice Springs. Without a uni degree, a few years in street press was the only selling point on my resume but it was enough to get me in the door. Later I discovered The Advocate was the first paper Rupert Murdoch purchased in his own right after his dad gifted him The Advertiser in Adelaide, so that’s cool. The crowning achievement of my three-year stint with the paper was nearly getting arrested by the Australian Federal Police for accompanying four lunatic protesters who broke in to the top secret Pine Gap spy base after trudging through 8kms of dense scrub in the dead of night to get there. My notepad and camera was confiscated. We got serious legal threats from the Department of Defence if we dared to publish my article and pics. This was the awesome start of nearly a decade with News Corp. At different times I was the political reporter, business editor, chief of staff and editor-at-large at The Advocate, The Cairns Post and The Sunday Mail. I wrote a weekly opinion column in Saturday’s The Weekend Post that pissed a lot of people off and still gets me into trouble today, some 15 years after the words were published. Working for the evil empire (Rupert and his editorial underlings) was incredible, really. I covered cyclones, Indigenous affairs, croc attacks, bikie gangs, and so much council, state and federal politics. I reported, edited, opined, oversaw and talked so much about politics I got tired of whingeing about it from the sidelines and recklessly quit my stable News Corp job to make a run for a seat in the Queensland Parliament.

The odds weren’t in my favour, at all. Labor had held the seat of Cairns for over 100 years and I was running for the other mob. If I didn’t win, I was out of a job I couldn’t return to –  it’s not possible to go back to the frontline of journalism after you’ve tarred yourself with a particular party. It was an all-or-nothing roll of the dice. And not a very fun one at that. Labor kept dragging up my old columns, the bad ones. It was fun but a bit full on. My face was plastered on billboards in Brisbane about 2000 kms away to scare the voters in the seat of party leader Campbell Newman. Some uni student even further away in New South Wales launched a national petition demanding the party disendorse me immediately. The newspapers I’d worked for just months earlier piled on, demanding the party disendorse me immediately. I got hate mail from concerned citizens across Australia. I’d never met any of them but they were very concerned with what they’d heard I’d written. It wasn’t my first rodeo in regards to hate mail but I was very impressed by how far and wide it came from. When it was all hitting the fan, the state election happened on March 24, 2012 and I won the seat. The first (and still the only) non-Labor MP to do so. Being elected the Member for Cairns and appointed Assistant Minister for Tourism was the career adventure of a lifetime. Lots of highs, lots of lows. A relentless travel schedule, back and forth from Cairns to Brisbane and overseas to Singapore and Papua New Guinea and back to Brisbane and then the Outback and Rockhampton and Toowoomba and home again to Cairns, and back and forth, on and on. That’s politics. During the term, I was Chair of the Queensland-Papua New Guinea Exchange Taskforce, Chair of the Queensland Tourism Backbench Working Group and Chair of the North Queensland Insurance Action Group.

One thing I’m sure of: I’ll never ridicule a politician again after being one. It’s not an easy job, and most politicians I met were in it for the right reasons.

At the state election on January 31, 2015, I lost my seat in parliament. Lost is probably too gentle a word. Like half of the Liberal National Party MPs at that election, I was obliterated off the electoral map. Election losses like that are brutal exercises in public humiliation. It was a tough time. But lessons were snatched from the jaws of that defeat. Lessons I channeled into creating a job for myself, a major priority at the time. First, I launched a little news blog called Cairns Now, which led to the bigger creation of Tropic Group, the media and marketing startup I founded in 2016. Leading the company as managing director and editor, I grew Tropic Group from the ground up into a dynamic, multi-faceted business incorporating an online news site, deluxe print magazine, food festival events and a creative design and marketing agency. I exited the company in late-2020. Launching and building Tropic remains one of the best things I’ve done so far in my career. 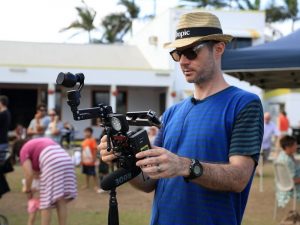 At some point during the past 7 years or so I nearly died, and then I got cancer. You can read all about the cancer thing here or watch the 7 News clip here, if you’re that way inclined. My health is all good now, gratefully. There’s an article about the time I got an infection that caused a slow growing duodenal ulcer that ruptured an artery, but the article is behind a paywall at The Cairns Post. In short, I had so much internal bleeding that neither I nor the emergency room doctors knew about until my blood pressure dropped to a level closely resembling death. I had a blood transfusion – a big one – and emergency surgery which saved my life. My health’s good now though. Really good.

These days, I’m consulting to some major brands and projects on media, marketing and corporate matters, hosting the weekly radio show The King Review on 4CA and developing some new startup projects. And still listening to music on CDs and vinyl, reading things in print and trying not to Google the answers to everything.